As in Sweden, the Finnish left succumb to a social-liberal, centre-right catch-all party that has successfully claimed the middle-ground

On Sunday 5 February, Finland got its 12th President. The conservative National Coalition Party (Kokoomus) candidate, Sauli Niinistö, was elected by a landslide of 62.4% against his Green Party opponent Pekka Haavisto in the second round of the presidential elections.

Observers familiar with Finnish political history might well ask the whereabouts of the Social Democratic candidate come the second round of voting. After all, the last three presidents, Mauno Koivisto, Martti Ahtisaari and Tarja Halonen, have all been Social Democrats, between them representing 30 years of social democratic leadership.

This election was a disaster for the social democratic candidate, former prime minister Paavo Lipponen, who got only 6.7% of the total vote in the first round run-off. Even the total combined support of the Finnish traditional left, the Social Democrats and the successor party of the once-strong Communists, the Left Alliance, would not have carried a candidate to the second round.

To understand the reasons behind the social democratic demise, we first have to look at the candidates. This was Niinistö’s second time running, having been narrowly beaten by incumbent president Halonen in 2006. His popularity ratings soared after this narrow defeat and he continued to poll well during the whole lead up to this year’s elections.

Niinistö has a history as a tough player on the economy. He was the minister of finance and chairman of his party during the late 1990s when the coalition government led by Social Democrats steered Finland out of its most severe economic recession in history. After a brief absence he returned as speaker of the parliament, using this new role very effectively by introducing many ideas categorised as populist, but which were popular among ordinary Finns and gave him the much-needed opportunity to stand out from his party.

Niinistö’s personal rise mirrors that of his party, Kokoomus, which has successfully captured the middle-ground of Finnish politics. The former socially conservative, economically neo-liberal party for the upper classes has evolved, as in Sweden, towards a social-liberal, centre-right catch-all party. This strategic shift was very much formulated by current prime minister Jyrki Katainen when in opposition.

Social democratic candidate Paavo Lipponen on the other hand, clearly possessed the most experience in European issues and foreign policy, both realms where the president still wields considerable influence. So why did he score so miserably?

Firstly, he failed to differentiate himself from the early favourite, Niinistö. They were the main duo in the governments of 1995-2003, and considered politically very close. When Lipponen entered the race he was, although a veteran and a political heavyweight, clearly a challenger. When he was then unable to formulate a clear, symbolically important position which would have stood against Niinistö, the electorate remained uninspired.

The heritage of Lipponen’s prime ministerial tenure is disputed among Finnish progressives. These eight years saw an economic miracle, rapidly rising employment, improvement to the Finnish economy, lowering foreign debt and the rise of Finland as the international example both in education and as the dynamic future information and innovation economy. But they also saw the widening gap between the rich and poor in society and the entering of market mechanisms to the public services.

Lipponen was also seen as the main architect of Finland’s very integration-oriented European policy, including the introduction of the Euro. In times of bail-out packages and the chaotic euro rescue operation, this didn’t favour the candidate. This has also left him politically isolated since the Social Democratic Party has, under its chairwoman and incumbent finance minister, Jutta Urpilainen, revised its European policies and has been clearly more critical towards the Euro rescue operations, especially in Greece.

Lost momentum was also a major factor. From the beginning of the campaign it was fairly obvious that Niinistö would reach a second round and interest soon shifted onto who would be his most likely opponent. For a long time the polls were stagnant, but it was the campaign of the Green Party candidate, Pekka Haavisto, which was able to read the signs and exploit the situation.

The Greens are undeniably one of Finland’s smaller parties, but enjoy considerable support in big cities and among young, educated people. Haavisto’s campaign was extremely successful in the media and his rise in the polls created a phenomenon, which became self-fulfilling. Progressive voters, already uninspired by a social democrat campaign that found it hard to market a 70-year old former prime minister as a fresh alternative, saw Haavisto as the most-likely challenger from the non-Niinistö block and started to group behind him. For these reasons the Lipponen campaign was doomed to fail.

Sorting through the rubble

So where does the result leave the Finnish social democracy and the SDP? The answer isn’t absolutely clear as personality-centric presidential elections do not precisely replicate party support, but certain conclusions can already be made with confidence.

First is, that the Social Democratic core vote has become obsolete and party loyalty has dropped to its lowest point. Each vote will have to be hard-won again. A fragmented core vote means the Social Democrats will find it hard to set the agenda in a way which would make the SDP attractive to both traditional employee voters and young social liberal-minded educated people.

The party is also losing trust and lacks a clear identity, both co-dependant factors. Finnish social democracy has proven vulnerable when cultural identities have become more important in determining voter behavior. Who is a Finnish social democrat? This question is becoming increasingly hard to answer.

After the SDP lost elections in 2007 and remained in opposition, the actions of the party have been guided by the urgent need of renewal. But without a clear vision of what this renewal would mean politically, the policy revision has looked more like a collection of separate positions without a unifying idea, rather than a coherent set of policies aimed towards fulfillment of a set of values.

When the ideological picture of the party is blurred, the identity problem worsens. At the same time, trust towards the party will suffer among the electorate. If trust is not regained, even popular or genuinely innovative policy ideas, which the SDP maintains, will not receive electoral support.

A final conclusion, one which has often been overlooked, is the strong grip the centre-right has on Finnish society. For decades the National Coalition Party was the third biggest party, and in permanent opposition. Now it has been the biggest political force in four consecutive elections, leading the current government, adding a newly-elected president, and is clearly topping the polls before the municipal elections due to be held in October 2012.

The left has been too keen to discredit this success on the growing individualism, crooked media and light and irresponsible attitude of many people concerned with politics. But this lazy analysis misses the point that the image of the party has actually changed in people’s minds. Kokoomus is trusted most by the electorate on economic and employment issues. This is due to their rather collaborative and cooperation-oriented outlook, good control of policies and message and also the revision of their most disliked policies. Their political message is very much value-oriented, and not position-oriented, aimed to minimise the obstacles to become their supporter. This was central to Niinistö’s campaign.

There is a need for the Social Democrats to pay attention to the lessons that the successive centre-right victories give. The party must strengthen their identity in a way which is inclusive, not exclusive, and rediscover their core values and commitments if they are to succeed again. 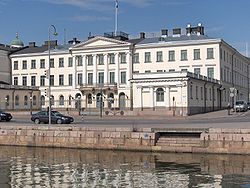